What is “Baltimore Green Works”? 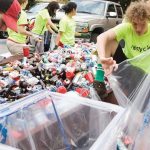 Are you in the early stages of developing a green lifestyle? One of the questions that often comes to mind when you are beginning your green journey is whether you are making a significant impact. As a beginner, you often feel as if you are not making a significant impact on the environment and that you are just a small part of a giant cogwheel. What’s important to remember when you have questions about the impact you are making is knowing that you are not alone. Many people in America are moving in the same direction as you are and making an effort to ensure that the planet is healthy and clean. In Baltimore, there is a large community that is taking the same steps as you are. A number of people in Baltimore discovered that they stood a better chance of making a significant impact if they joined hands, so they collaborated to form various green groups. People like you are now in charge of these community-based green groups. You can start your green project or join and Volunteer in the existing ones. One of the most impactful of these community-based green groups in Baltimore is Baltimore Green Works.

Posted in Main | Comments Off on What is “Baltimore Green Works”?